I wish I could tell you that setting up the transmitter was straightforward, but unfortunately, it wasn’t. I’ll do my best to describe what I did, although I’m not sure my process is 100% repeatable.

I have a Turnigy 9XR Pro transmitter with a FrSky JR module. It is a digital radio with lots of features: updateable firmware, model memory, custom sound files and so on.

The first thing I did was upgrading the firmware. That process is a bit different depending on whether you have a PC or Mac. Effectively it involves connecting the transmitter to the PC with a USB cable, firing up eepskye application, setting a few parameters and flashing a new firmware via the app. I found a useful cheatsheet for updating Turnigy 9XR firmware at Quadcopter Basics website. It is also worth to consult the official Turnigy 9XR Pro: Using the Eepskye Program manual.

All subsequent setup is performed on the transmitter itself via the series of the menus. Unfortunately, the structure of those menus changes depending on the firmware version. My version after the upgrade was V.3527-Mike. There’s a 9xr tutorials RCGroups forum thread to help you with the initial setup, besides John G provided a useful Turnigy 9XR APM Arducopter/Arduplane radio settings cheatsheet. Also don’t neglect to check the official 9XR Pro: First Steps with Ersky9x manual, but keep in mind that those may be outdated.

A long press on the left side 4-position switch gets you to the main menu. 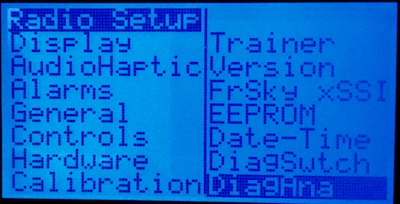 A long press on the right side 4-position switch gets you to the main menu. Here you need to create a new entry for your model. 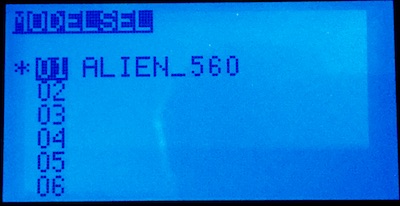 Once you create a new model name, there are a few settings which need to be set up for it.

First of all, Enter Protocol section to set up your module and receiver options:

Pixhawk has quite a few flight modes. If you want to switch flight modes in-flight, a radio transmitter usually has a 3-way switch you can use (some radios have a 6-way switch). Turnigy 9XR has a 3-way switch, but I wanted to do something more advanced than just being able to choose between 3 modes. I got an idea from Mike Perillo’s blog post. My setup allows me to switch between 5 modes in the following way: 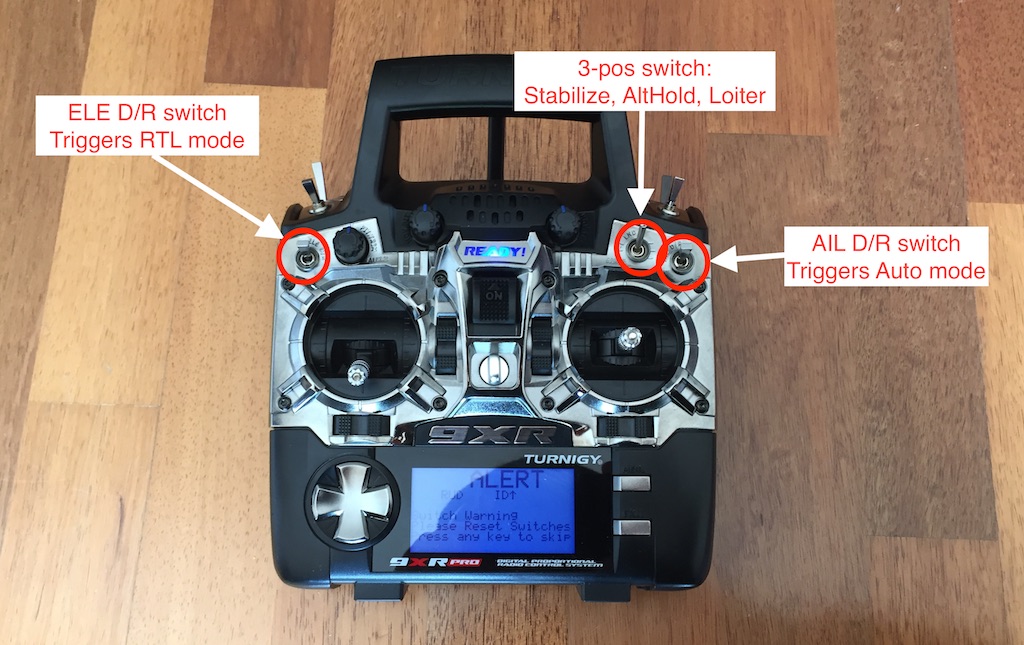 The way I did that was with the combination of logical switches and mixer configuration. An important thing to understand is that the flight channels are mapped to the values on Channel 5 according to the configuration you define in Mission Planner or QGroundCtrl (more on that later). So all you need to do is to map different flight modes to values evenly spread across -100 … +100 range on channel 5. That involves a few steps:

Enter Model Setup → L.Switches menu. Logical switches can have On and Off values just like real switches, but they are defined by logical formulas rather than positions of the handles on the transmitter. Set up logical switches like this: 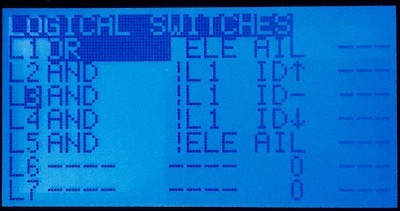 This effectively corresponds to the following formulas:

Next set up flight modes in Modes menu. 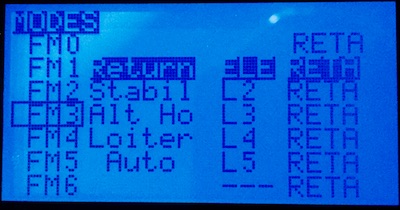 You can see that Flight Mode 1 - Return is triggered by ELE D/R switch, while 4 other modes: Stabil, Alt Ho(ld), Loiter, and Auto are triggered by logical switches L2 to L5 respectively.

And finally, enter Mixer menu. These are probably the most complex settings in the entire transmitter, and I’m going to cover just enough of it to set up the flight modes the way we want.

You can see that channels 1 to 4 are mapped 100% to Aileron, Elevator, Throttle, Rudder (remember I told you about AERT channel order?), while channel 5 is different. It is configured to trigger the discrete values depending on the values of the switches we have previously set up. All the CH5 submixes are identical except for Offset and Switch values. 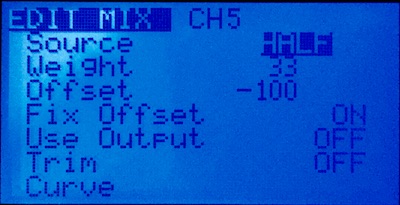 Submixes 2-5 have Replace multiplier. The above setup means that switches ELE, L2, L3, L4 and L5 are mapped to values -100, -77, -50, -20, 27 on channel 5 axis, which works nicely to switch between the first 5 channels configured in the ground station software (I’ll cover that later). I chose those values empirically by tweaking them until that worked.

That concludes the transmitter setup. Next, to the Pixhawk software setup and configuration.